This has been on my heart for a while now.  Perhaps like me, there are things you have been praying for – but as yet have not received your breakthrough.  Promises you’re standing on, but manifestation hasn’t shown up yet.   Declarations of faith that are beginning to sound a little hollow – even to your own ears.

For those who know me, I am pretty passionate about the Word of God.    Through teachings of trusted Pastors and my own personal studies, I have come to understand the power and authority placed into our hands as joint-heirs with Jesus Christ, Ambassadors of the King of Kings.  Most days, my feet are firmly planted on the Word of God and I am a force to be reckoned with.   My philosophy is simply.  If the devil wants to mess with me on this or that area of life – He’s going to hear what Jesus has to say about it!

But in spite of my knowing that the Word of God is the power of God, there are days when I’m weary.  Or as I’ve shared before, a bit “wobbly“.   The last several weeks have been like that for me.  I’ve been pressing.  I’ve been declaring.  I’ve been believing.  And I’m still waiting.

I’m not discouraged, per se.  Or at least not discouraged in the way that one feels when they decide to ‘give up hoping’ and resign themselves to the situation.  No, I’m a bit too far gone for that.  I’ve walked long enough with God to know that He will always move on my behalf and deliver on His Word – even if it’s not within my desired timeframe.   Abraham waited 25 years for the promised heir.  Noah waited (while building the arc) 120 years before the flood came.  God does always not operate on our time tables.   But He IS faithful to His covenant promise – and I have His Word on what I’m praying/believing for – so I know if I stay in faith I will eventually get my breakthrough.   But the waiting is harder some days than others.  Right?

That’s why I’m so grateful that I’ve the Holy Spirit living inside me to speak to me on wobbly days.  And what I’m hearing loud and clear in my spirit is to “Apply Direct Pressure!”  Now that may not mean much to you – but to me it resonates very deeply and speaks clearly of two critical actions that are required on my part, and yours if you want to get your victory.

ACTION #1:  Keep putting pressure on the Word of God:  study the Word of God, read and memorize God’s promises as related to my circumstance or trial, speak them over myself and my situation, make a demand upon the promises of God by calling those things that be not as though they were … until they are!   In other words, don’t get discouraged and worn down by my situation – but instead keep my faith stirred up and keep putting pressure on the Word of God for my deliverance and breakthrough.  God’s Word is sure and my enemy will fall!

Yes, the fight of faith can be wearing at times – but it is a battle that has already been won by Jesus Christ!  You and I have got to remember that, or the devil will dupe us into thinking that the victory belt is still up for grabs.   It is not! 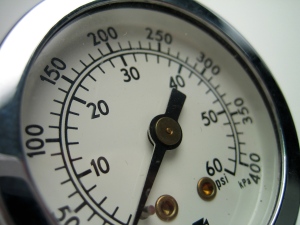 More dangerous still is the temptation to think that the winning or loosing is somehow dependent on us … our fortitude, our strength, our skill.  Again, it is not!  The fight has already been won, and it is our job to put on the full armor of God and enforce the victory won by Jesus Christ!

ACTION #2:  Keep putting pressure on the enemy:  open my mouth and speak the promises of God to my adversary, refuse to sit down and shut up, man the battle stations and be ready morning/noon/night to enforce his defeat.  In other words, don’t be a passive opponent but rise up in the power of the Holy Spirit living within me, and remind the enemy at every turn that He is a defeated foe and is subject to the Name of Jesus – and Jesus left me (and you) His Name!    He is a defeated foe, but his defeat has to be enforced – not in my strength or authority, but by the authority of Jesus Christ!

Finally, be strong in the Lord and in his great power. Put on the full armor of God so that you can fight against the devil’s evil tricks.  Our fight is not against people on earth but against the rulers and authorities and the powers of this world’s darkness, against the spiritual powers of evil in the heavenly world.  That is why you need to put on God’s full armor. Then on the day of evil you will be able to stand strong. And when you have finished the whole fight, you will still be standing.   (Ephesians 6:10-13)

Thank you Lord, that’s just what I needed.  I’ve got my “grrr” back, how about you?

Let us not grow weary, but get back at the business of fighting the good fight of faith so that we can lay hold of all that God has provided for us through His Word!