I’m embarrassed to say that there was a time in my life (late teens-early 20’s) that I had quite a mouth on me.  No, I didn’t have a potty mouth (my mom would have literally washed my mouth out with soap  … and my perspective of God was that He was listening up there in heaven and would score me ‘negative points’ for cussing).  Instead, I had a mean mouth.  I knew how to use words to cut someone down to the quick in 3.5 seconds flat.   I was actually kind of proud of that – how skilled I could be with my words – and if you crossed me (especially in the work place) you were probably going to be on the receiving end of some pretty mean-spirited words, skillfully crafted to inflict pain and let you know (in no uncertain terms) not to mess with me again.

I’ve already written (see My Story category) about my abusive second marriage.  So I guess it was Mr. “T” that really helped me to understand how much words can hurt a soul.  As a result, I became a little more thoughtful about my speech.   Instead of just blurting out all the venomous words bubbling up, I learned to shut my mouth and first process my feelings/emotions … and then once I had control over my mouth (or at least thought I did), I would then try to speak my feelings.   Good practice in life, but unfortunately doesn’t accomplish much good when you’re married to an abusive sociopath.   Still, I learned some valuable lessons about the power of words during my almost 10-year marriage to him.

A single mom by age 31, my two young daughters provided me many (many) opportunities to practice managing my mouth. Countless opportunities to instill in their hearts the truth that words carry with them the power to build someone up or to tear them down … and our house rules (in my house, at least), were to speak kindly.

But it wasn’t until my 50’s that I began to study what the Bible says about the power of words.

I’ve been working on my painting – and as I consider what the “Garden Spot of the Soul” might look like, I can’t help but imagine what the Adam and Eve might have experienced during their walks with God ‘in the cool of the day’.  (Genesis 3:8-9)

“In the beginning, God placed everything that man could use and enjoy in the Garden.  God saw to it Adam lacked nothing.  He lacked no good thing.  He was created in the image of God Himself, leaving nothing to be desired.

God furnished Adam with companionship, ability, abundance, and a kingdom.  He told Adam to be fruitful, multiply, fill the earth, subdue it and have dominion over every living creature.  Adam was the master of the Garden, and God was the master of Adam.  God’s man was free in every way!”

God designed a world in which His highest creation, mankind, would live in community with Him.   And similar to how God used His creative power to create time, space, and everything that was created (John 1:1-3), Adam was given a level of creative power in order to subdue and have dominion over a portion of God’s creation.   And the way that Adam exercised that power was through words … the very same mechanism that God used to speak the galaxies into existence.

Adam’s words had power.  Power for Life and Blessing.   Power for Death and Cursing.

“He (Adam) knew no bondage until that fatal day when …

Every phase of Adam’s life came under the curse of his new god, Satan. He was driven from the Garden; abundance was no longer his to enjoy. He had to toil and sweat in order to survive. His beautiful life was overrun with thorns and thistles both in the physical world and in the spiritual world.”

And there we have it … the entrance of thorns and thistles.  They were brought into being by negative and contrary words spoken by Adam and Eve (words that don’t say what God says and don’t agree with God’s declared will), thus sowing seeds of death and cursing instead of seeds of life and blessing.

I quickly snapped this picture to show my progress – the lighting is poor and clearly I’ve a long ways left to go.  But I’m trying to lay colors down in layers this time – to take it slow and let it evolve naturally.  Hopefully I can keep this going without having to start over again.  We’ll see. 🙂

Excerpts quoted are from the book “God’s Will Is Prosperity” by Gloria Copeland.

All sketches and watercolors posted on this website are the sole property of the author and are for exclusive display on the website PuttingHopeToWork.com. 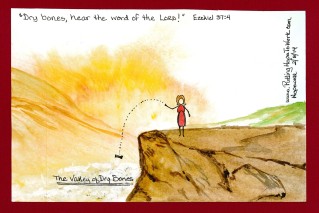 “The Valley of Dry Bones” http://www.puttinghopetowork.com 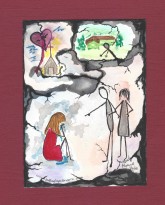 “The Nightmare that was “Mr T”. www puttinghopetowork.com

“Of Dreams and Nightmares” http://www.puttinghopetowork.com

Inspired by my last name, I'm on a journey to better understand the intertwining of FAITH & HOPE.